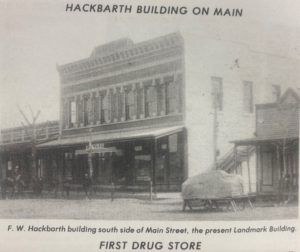 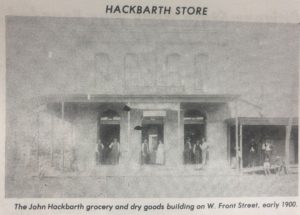 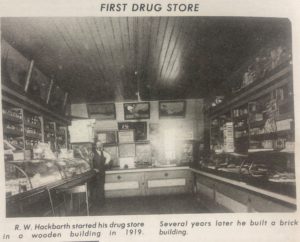 German natives F. W. (Fritz) and Carolyn (Krampitz) Hackbarth arrived in Galveston in 1846 with their two sons. They settled in Austin County, where Fritz farmed and ranched, and the couple had four more children, including F. W. Hackbarth, Jr. (born 1849). He was a carpenter, who in 1885 opened the Hackbarth Lumber Company, one of Sealy’s earliest enterprises. He was joined in the business by his sons Paul, Robert and John. The lumberyard supplied materials for the early growth and development of Sealy, expanding to include a brick plant and then concrete masonry production. This material was used in commercial buildings completed for F. W. Hackbarth and John Hackbarth in 1907, other businesses including an ice house, and the Paul and Mahala Hackbarth house in 1911. F. W. Hackbarth, Jr. owned a block of frame buildings on Main Street, which he razed in 1907 to erect a new concrete block structure. The building features load-bearing masonry blocks produced at their factory, a canopy with iron column supports, an angled corner, and a cast iron façade storefront ordered from George L. Mesker and Company of Evansville, Indiana. Citizens State Bank formed in 1907 and occupied part of Hackbarth’s new building, with capital of $25,000, assets of $46,000, R. A. Engelking as president, and John Hackbarth on the board of directors. The bank outgrew its location by 1917. The building had many commercial uses, notably Fred Frimel’s Jewelry and Hackbarth General Store and Grocery. During World War II, this was the site of a Red Cross Office and War Bond Sales. The Sealy News was printed here from 1942 until the late 1990s. The building exhibits significant craftsmanship and recounts noteworthy history and commerce of the community.- Marker

Richard W. Hackbarth was a druggist for over 50 years. At years old he came to Sealy from Flatonia. When he was 13 his father established him in the drug store business here and in 1896 he purchased the store from his father. In 1897 He married in Bastrop and took over management in a drugstore in Brady, TX. In 1919 he returned to Sealy where he opened a drug store of his own and operated it for 20 years. In 1939 he sold his pharmacy to Henry Hess Jr. and continued only the watch repair service until he became ill and passed away.  In 1961 Frank De Fratus, a pharmacist at Hess Drug bought the store after Mr Hess passed away. DeFratus sold the store to D. B. Stewart in 1971 and Stewart sold it to Frank McRae in 1975. McRae later added a Walgreen Store.-The Sealy News 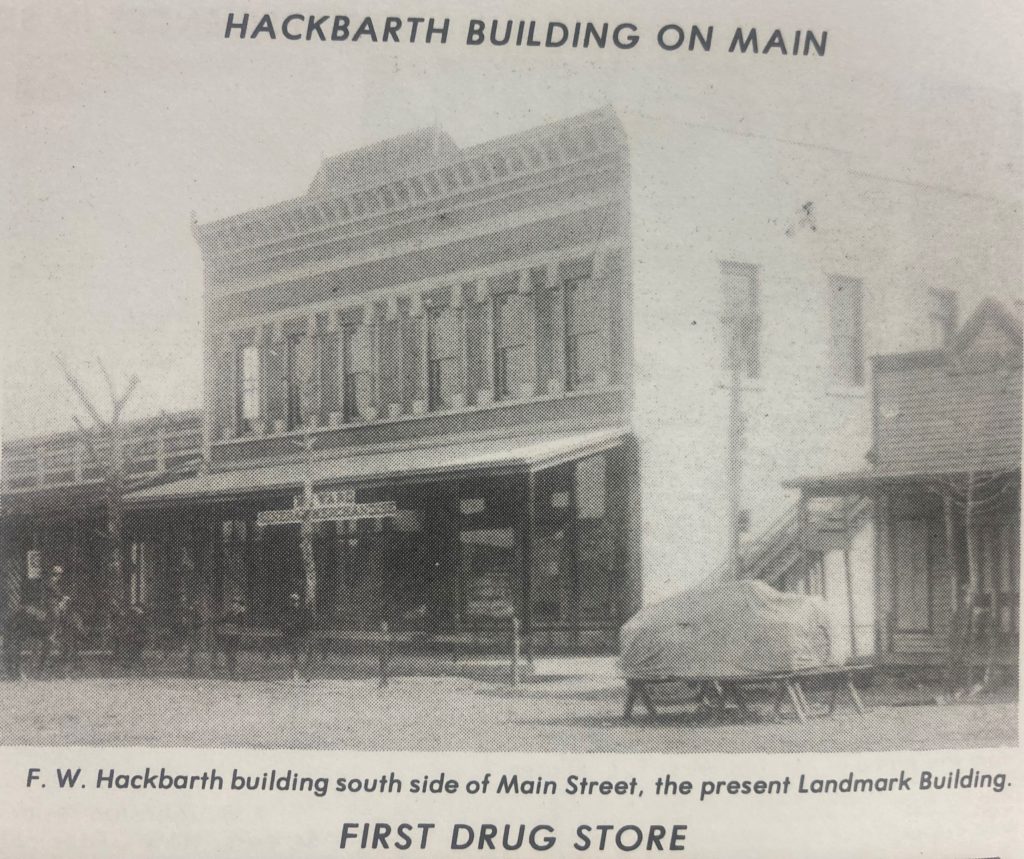 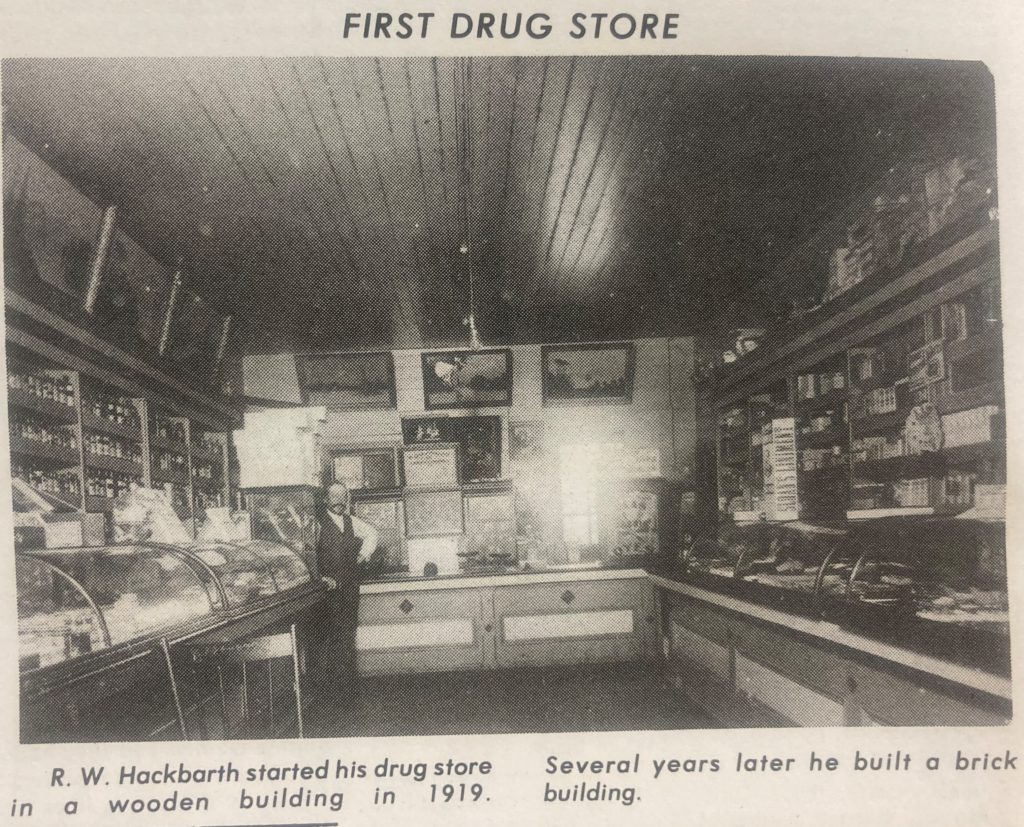 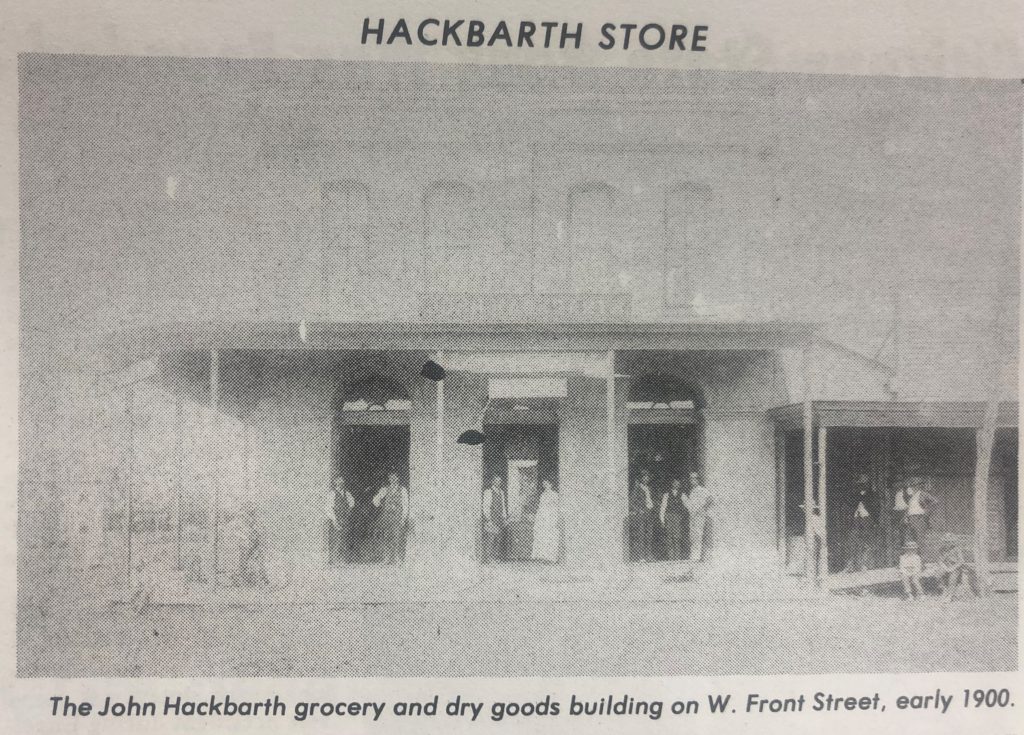