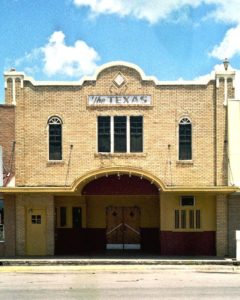 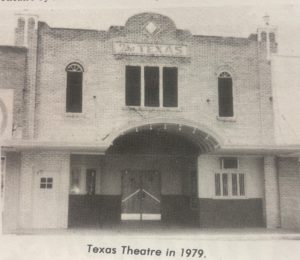 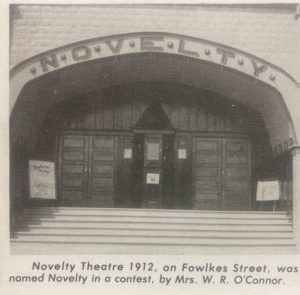 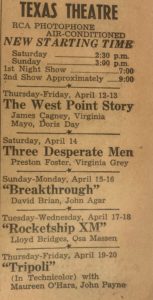 The first movie theaters in Sealy only showed silent films.  The first was located on Front Street and was owned by John Ripple and George Merkel.  Later, Billy Sanders and Frank Krampitz bought the silent theater and moved it to Fowlkes Street, across the street from where Bill’s Grocery is now located.  The silent theater was known as The Novelty Theater.

During the era of silent movies it was common for people in the audience to talk during the movie and to express their feelings about the action in the movie.  Attending a silent movie was a social event that encouraged people to talk and get to know each other.

The silent movie theater burned, and, in 1929, a few years after talking pictures became available, the Krampitz family built the Texas Theater on Main Street.  The first movie projector used in this theater is located in the Santa Fe Museum in the Sealy Historical Park.  Frank Krampitz managed the Texas Theater for many years.  The old Sealy News building, built in 1900, had been in the location of the Texas Theater; this building was moved by the Levine family further east on Main Street, and is now the Santa Fe Museum.

When the talking movies arrived, it was no longer okay for people to talk during the movies.  When movies were silent the audiences were not, and when the movies started having sound, the audiences became silent.

Prior to television, movie theaters were a primary source of entertainment for people of all ages and income levels.  In the early days of Sealy’s new theater, films known as serials were shown regularly.  The serials were similar to television series.  A story was told over a period of many weeks, with a different segment shown each week.

The newspapers in the area regularly wrote about the movies and serials that were scheduled for each week.